On the evening of December 31st, 1862, Black Americans gathered in homes, churches, and community spaces awaiting the New Year which would bring with it the freedom outlined in the Emancipation Proclamation. Black Americans, enslaved and free, called that night “Freedom’s Eve.” Frederick Douglas said, “We shout for joy that we live to record this righteous decree.” Since then, generations of Black Americans have lived and died, existing in a liminality between slave and citizen. While Juneteenth commemorates the end of slavery, white supremacy and systemic racism continue to oppress, disenfranchise, and imprison Black Americans. We affirm, once again, that Black Lives Matter and ask our community to be actively anti-racist and fight for Black citizenship, personhood, and wellbeing on this Juneteenth and always. 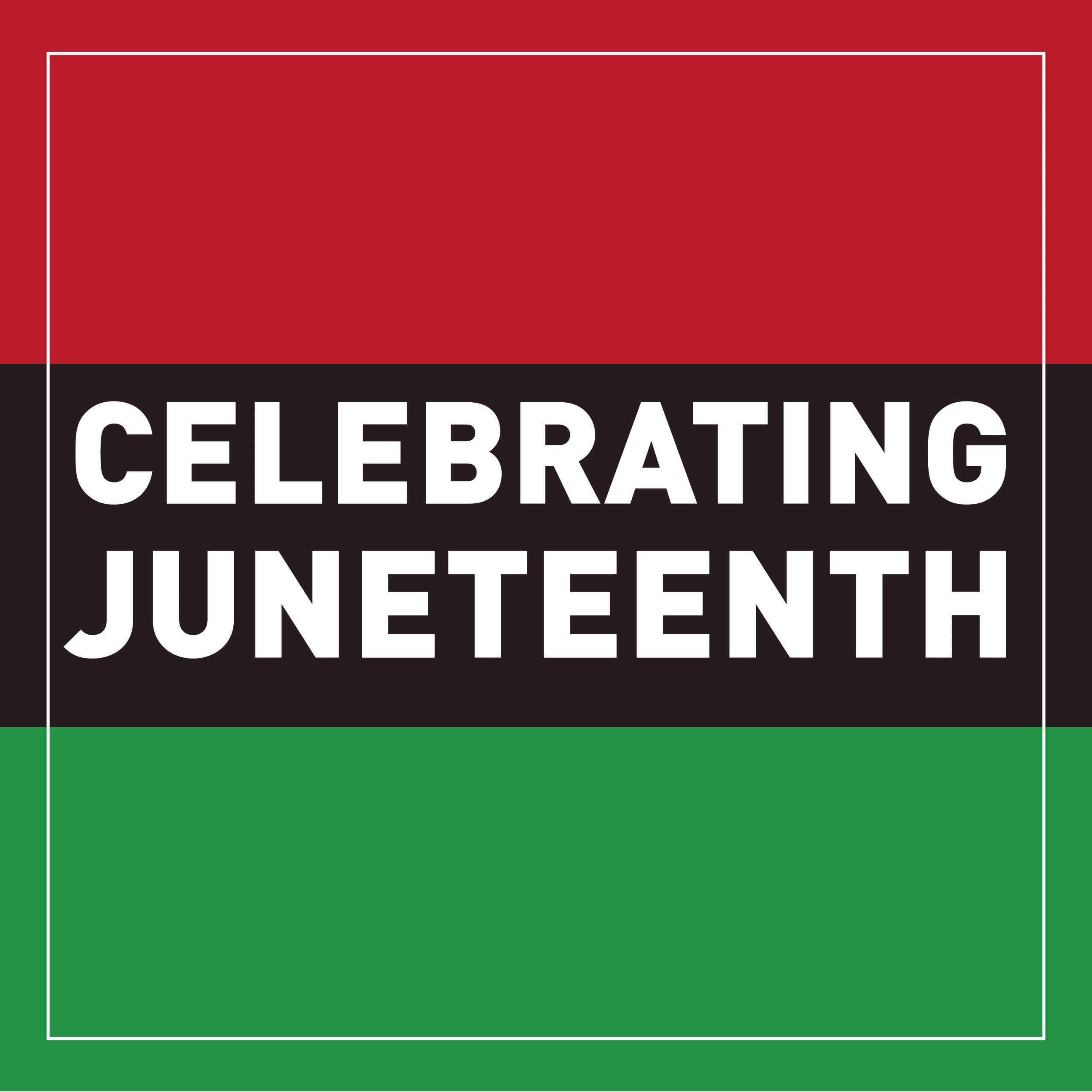 On January 1st, 1863, the Emancipation Proclamation freed enslaved folks in Confederate states, at least on paper. About 500,000 of 3.9 million enslaved people were able to liberate themselves by escaping behind Union lines between 1863 and the end of the war in 1865. The rest – the vast majority – remained enslaved. The Emancipation Proclamation also authorized Black men to join the Union army. These men would be crucial to the Union’s war effort, especially as Northern forces swept through Confederate territory liberating enslaved populations. After the Proclamation was issued, slave owners in Mississippi and Louisiana marched more than 150,000 enslaved Black people west to Texas, beyond the reach of Union forces at the time. Texas remained under Confederate control until the spring of 1865, more than two years after the Emancipation Proclamation took effect. On June 19th, 1865 in Galveston, Major General Gordon Granger announced:

“The people of Texas are informed that, in accordance with a proclamation from the Executive of the United States, all slaves are free. This involves an absolute equality of personal rights and rights of property between former masters and slaves, and the connection heretofore existing between them becomes that between employer and hired labor. The freedmen are advised to remain quietly at their present homes and work for wages. They are informed that they will not be allowed to collect at military posts and that they will not be supported in idleness either there or elsewhere.”

This is the day we celebrate as Juneteenth (“June” plus “nineteenth”), the day freedom came to those enslaved folks still living under Confederate control in Texas, at least symbolically. Granger’s announcement asks the newly freed people to “remain quietly at their present homes and work for wages,” which exemplifies how ending slavery and upholding white supremacy can completely coexist, almost in the very same sentence.

The freed people of Texas continued to commemorate the ending of slavery each June 19th. They celebrated near lakes and rivers with a large, central barbecue pit and readings of the Emancipation Proclamation. When Black people were barred from celebrating in public spaces, they raised money to buy Emancipation Park in Houston and Booker T. Washington Park in Mexia. Celebrants dressed in their finest clothes, however poor, to push back against racist characterizations by white folks. Juneteenth celebrations endured through times of extreme violence as well. Between 1885 and 1942, Texas lynch mobs brutally murdered at least 339 Black folks, mostly men. While newspapers failed to report the violence and history texts rewrote the story of the Civil War, Juneteenth endured. In Hayes Turner’s words, Juneteenth is “a potent life-giving event … a joyful retort to messages of overt racism … a public counter-demonstration to displays of Confederate glorification and a counter-memory to the valorization of the Lost Cause.” 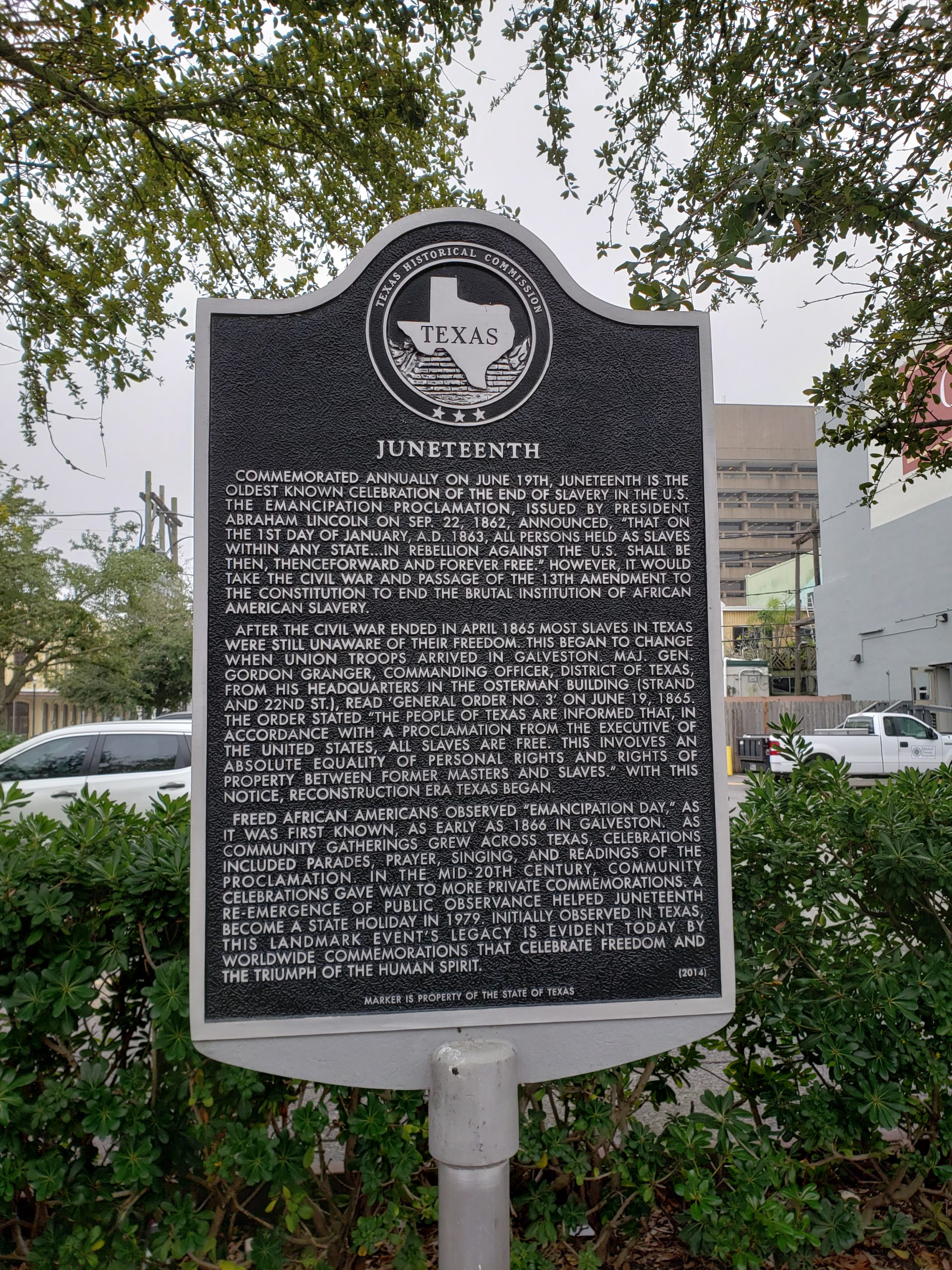 Between 1916 and 1970, half of the southern Black population, nearly 6 million people, migrated north and west to escape segregation, widespread lynching, and a lack of social and economic opportunities in the Jim Crow South. This movement northward is known as the Great Migration. Black Texans took Junetheenth with them. Starting in the 1920s, Black communities celebrated in Oakland, Los Angeles, and Seattle in the west.

Juneteenth was bolstered once again when civil rights organizers of the Poor People’s March told delegates to take Juneteenth back to their communities. After 1968, Juneteenth took root in the Midwest. From there, it spread to nearly every state. In 1979, Texas made Juneteenth an official holiday (the state government also affirmed its commitment to celebrating June 19th as Confederate Heroes Day). California recognized the holiday in 2003. Today, 45 states and Washington DC recognize Juneteenth.

The 13th Amendment, officially ending slavery, was ratified on December 6th, 1865, 5 months after Texas’ enslaved population was freed. The full text of section 1 reads, “Neither slavery nor involuntary servitude, except as a punishment for crime whereof the party shall have been duly convicted, shall exist within the United States, or any place subject to their jurisdiction.” Many Black scholars have traced a line from the exception clause (bolded in the text above by the author of this blog) to mass incarceration rates among Black men in the US today (Ava DuVernay’s documentary 13th explores this connection deeply; it’s available on Netflix). Black Americans are incarcerated at more than 5 times the rate of white Americans. That means one out of every three Black boys born today can expect to be sentenced to prison, compared to 1 out 6 Latinx boys and one out of 17 white boys.This is white supremacy at work. Slavery, sharecropping, segregation, lynching, police brutality, and mass incarceration are all iterations of deeply systemic racism upheld at every level of society by white supremacy.

Today, more than one out of every six black men who should be between 25 and 54 years old have disappeared from daily life, according to the NAACP criminal justice fact sheet. Incarceration and early death are the leading causes. For those that are released from incarceration, nearly 50,000 legal restrictions block access to work, housing, and educational opportunities in this country. These barriers to re-entry lead to high recidivism rates, plaguing communities of color. Planting Justice, an organization based in Oakland, works to heal communities suffering from mass incarceration. They’ve built over 550 edible permaculture gardens in the San Francisco Bay Area, worked with five high-schools to develop food justice curricula and created over 40 green jobs in the food justice movement for people transitioning from prison. They have created a movement that centers sovereignty and healing around food, around sticking your hands in the earth and bringing forth life for whole communities.

The Davis Food Co-op is supporting their work with a $500 donation in commemoration of Juneteenth. This donation will support their Holistic Re-Entry program, which provides permaculture garden training to folks inside San Quentin State Prison, offers meaningful work and a living wage when they’re released, and prioritizes the health and wellbeing of formerly incarcerated persons and their communities in the Bay Area. We plan to continue to support organizations like Planting Justice with monetary donations. As mentioned in our Racism and Bigotry blog, redistributing resources, especially money, to organizations for and by the BIPOC community is one way to be actively anti-racist. We invite you to join us in supporting Planting Justice, which continues the project of Juneteenth in our community through building food sovereignty, economic justice, and community healing.