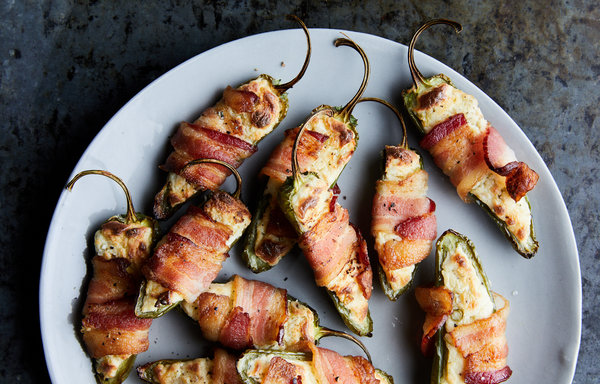 Heat the oven to 400 degrees. Line a large baking sheet with aluminum foil, then top with a wire rack.

Halve jalapeños lengthwise. Using the tip of a small spoon, scoop out and discard the seeds and pith. Set the halved jalapeños aside.

In a medium bowl, stir together the cream cheese, cilantro, scallions, garlic and lime zest; season generously with salt and pepper.

Season the inside of each halved jalapeño with salt and pepper, then fill each with about 2 teaspoons of the cream cheese mixture. (Fill until there’s a slight dome on top.) Wrap each stuffed jalapeño with 1 piece of bacon, setting one tip of bacon on top of the cream cheese filling, then wrapping the bacon under and over the popper at an angle, so the bacon covers the filling on top in two layers. (The bacon will shrink as it cooks, so you want to make sure the top of the popper is well covered.) Arrange poppers evenly on the wire rack, nestling each popper between two parallel wires to keep it upright so the cream cheese doesn’t spill during baking.

Transfer to the oven, and bake until bacon is cooked through, about 25 minutes. Broil on the rack closest to the broiler until crisp, about 2 minutes. Let cool for 5 minutes, then serve warm.